He Has Come So Far

Today as I was watching B and G play together I began to reminisce.

B is my 'little old man'.  Despite the fact that he is only 6 years old I'm telling you this kid is wise beyond his years.

I have always been able to have conversations with him and he seemed to completely understand what I was saying.

For example, he was the first person I told when I found out I was pregnant with G (B was the only person home and I just had to tell someone).  At the time he wasn't even 2 years old yet.  He watched me with his big blue eyes and nodded as I explained that he was going to be a big brother.  I still remember the expression on his face and his response, "You have baby in yo tummy, Mommy?"  "I wanna see!"

As any parent, I am so proud of him.  I feel badly because I don't think I tell him this as much as I should.  I neglect to tell him this because he is so mature and I just figure he knows.  Well just 'assuming' he knows isn't good enough!

B took part in his first Christmas program when he was 3 years old.  He was involved in a preschool program within the church daycare he attended.

As he stood on stage it was obvious that he was petrified!  I mean absolutely terrified.  He stood up in front of all of those people clenching onto his bear and just stared at them.  It took all I had not to cry for him.

He managed to stand for 1 song and when it ended he quickly ran off of the stage calling, "Mommy!"  Naturally, I quickly scooped him up in my arms and held him.  Just writing this now makes me want to cry!

The following year we moved him to a different preschool program.  It was a preschool within the same township that I teach.

While Brent and I waited for his class to walk out in front of the audience we held our breath.  We were hoping that he didn't have the same reaction as the previous year.  Much to our surprise, not only did he walk out with a smile, but he participated in the singing and the movements to all of the songs! 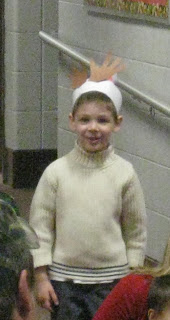 For the 2010 - 2011 school year he remained in the same preschool program because it was a 2 year program and he wasn't old enough for Kindergarten.

Unfortunately, due to his work schedule Brent wasn't able to attend this Christmas program.  I, however, was.

Again, I was beaming with pride as I watched B join in with his classmates and participate appropriately with each song.  This year it was a little different, however, he had become a leader.  Right before my eyes I saw my son taking initiative and following directions and this was the first time I realized it outside of our home. 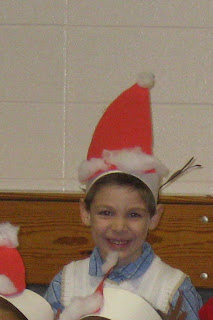 In 2011 he was ready for his first Kindergarten Christmas program.  His years in preschool had prepared him well.  This year not only did he have to sing and move, but he had props!  He did a great job remembering what to use and when to use it.

Now here's the part that I've been leading up to ---- B's class had an end of the year program.

B brought home a note from his teacher.  The note indicated that B VOLUNTEERED for a speaking part in the up coming program!

He started out as this little 3 year old boy who was brave enough to stand holding his bear on stage for one song.

He has grown into this little boy who volunteers for a speaking part.  He practiced each night.  He memorized the part and when it came time to preform . . . while he was a bit nervous, he still did it!  And we couldn't have been more proud of him!