You are about to read the conclusion of a story about how my husband and I met. The following posts lead up to this post:
The Swing on the Porch . . . Our Story

After Brent took the initiative to email me, I made a decision.  I was going to take things one step at a time.  I began by emailing him back.  Eventually, he and some of his friends made a 6 hour drive to come and visit me for a weekend.


One of my college friends was from a town about hour away from our campus.  Her parents were out of town for the weekend.  A group of us drove to the house and had a little . . . party get together.  During said get together, I managed to trip down a small step causing me to sprain my ankle.  (I’m sure it had nothing to do with what I was drinking)  It hurt so badly that I wasn’t able to walk without assistance.  Being the college geniuses that we were . . . my friends suggested that I just needed to have a few more drinks to make the pain go away.  Yes, I am fully aware that this was not the best choice.  I do want you to know that we planned to stay the night at this house and we did actually stay.  We were being safe.  Needless to say, I was super embarrassed in front of Brent!  Let me also tell you it was NOT fun trying to explain this to my parents when they asked why I was going to urgent care the following day.


After he came to visit me, it was my turn to visit him.  I had not told my parents that Brent and I were really talking very much.  I wasn’t sure where things were going between us.  I didn’t want to get my hopes up just to be let down, again.  I made the 6 hour trip to his home town and attend his college graduation without letting my parents know where I would be for the weekend.  My dad put two and two together when he noticed the increase in mileage on my car.  Oops! Dumb me!  Did I really think he wouldn’t catch that one?  I mean my dad was a mechanic and all.  He knew that car like the back of his hand.

After completing my freshman year of college I returned home.  Brent and I spent the summer driving back and forth to visit one another.  Thank goodness gas prices weren’t too high then!  At some point that summer we made it clear that we were exclusive.  Our relationship continued throughout college.

The summer before our senior year of college my roommate, Rachel, and I planned a mini-vacation.  It was to be a small weekend getaway for Rachel, her then boyfriend now hubby, Josh, Brent, and myself.  Together, Rachel and I made all of the plans for the weekend.  When we both finished working on Friday we made the 4 hour drive to meet the boys in Chicago.


While in Chicago we visited Navy Pier.  For those of you not familiar with Navy Pier it’s area just off of Lake Michigan.  There are several shops and touristy things to do.  One of our favorite activities that Brent and I enjoyed doing when we met in Chicago was riding the ferris wheel.  The ferris wheel is huge and covered in lights.  I love viewing the Chicago skyline from the highest point of the ferris wheel, especially at night.  Of course we made sure to ride the ferris wheel while we were there.  This time for some reason the height began to bother me.  For some unexplainable reason I could not wait for the ride to be finished and get off of it!

When it stopped, I couldn’t get off of the ferris wheel fast enough.  The four of us chose to walk around the pier a bit longer before going back to the hotel for the night.  Before we knew it the weather forced us to change our plans.  Rachel and I began walking as quickly as we could as the drizzle turned into a down pour!  At the time I couldn’t figure out why Brent kept poking around and why he wouldn’t hurry up.  I was freezing and just wanted to get out of the rain!  What was his problem?!


On Sunday evening Brent got ready to leave.  He had to work Monday morning.  Rachel, Josh, and I were going to leave on Monday morning.  As we were saying goodbye he said “I think there’s something in here for you”, as he reached into his pocket.  He pulled out a box.  I thought it was a pair of earrings or a necklace or something.  I had absolutely no idea what I would find when I opened the box.  As I opened the box Brent reached for my hand and got down on one knee.  I couldn’t believe what I saw inside the box.  It was an engagement ring!  He took my hand and said, “Will you marry me?”


I was in complete shock!  We talked about the future all of the time.  I knew that we would get married, someday.  I wanted to get married after I graduated.  We had never actually discussed when we would get married.  I had been secretly hoping all summer that he would propose to me.  I had given up hope for a couple of reasons.  First of all, it was the end of the summer and he still had not asked me.  Second, Brent takes 12 years to make a 5 minute decision.  He wasn’t about to make a life changing decision, such as proposing, very quickly.


As you can imagine I was truly shocked.  I said the first thing that came to my mind, “Are you serious?!”  Yeah, I know great response, right?  Here I was in the middle of the moment that I had dreamed about and I freaking asked him if he was serious . . . nice move, Erin!  He smiled at me and told me that he was serious and slipped the ring on my finger.  Of course we kissed and then . . . Rachel poked her head in and said with a giddy grin on her face, “I don’t mean to interrupt, but did you just get engaged?!”  I was so excited all I could do was flash the ring at her.  Then we did what most girls would do, we jumped up and down and spoke to each other in some high-pitched girl language. 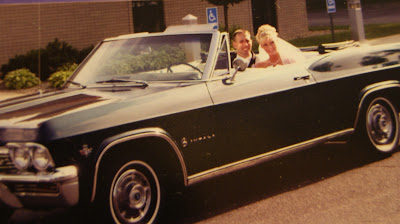 The car that started it all!

We had our Cinderella (seriously, it was a Cinderella theme) wedding on July 17, 2004.  Almost a year after he proposed to me.  Brent and I don’t have a perfect marriage, no one does, but we do love and respect one another.  We tag team parent and make decisions for our family together.  I believe with all of my heart that we were are meant to be together.  How else do you explain 2 kids from 2 different states meeting, corresponding, forming a relationship, getting married, and living happily ever after?

Email ThisBlogThis!Share to TwitterShare to FacebookShare to Pinterest
Labels: how we met, part 5