You are about to read the 4th part of a story about how my husband and I met.  The following posts lead up to this post:
The Swing on the Porch . . . Our Story


The drive home after attending Brent’s prom was long and boring.  I eagerly took my film (yep, still used film . . . no digital in those days)   to be developed at the 1 hour place.  I just had to have something to show my friends at school on Monday.


Eagerly I awaited the return of summer.  I knew our next meeting would be at the annual car show that would be held in Nebraska.  Brent and I both brought friends with us that year. Brent's parents also let him drive a separate car. For 4 teenagers this was the best gift ever! We now had freedom from the boring adult stuff. 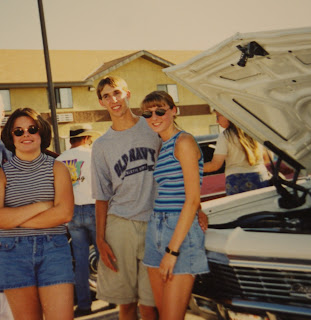 After spending about 10 minutes in Nebraska all of us were so thankful to have the freedom of our own car.  I’m sure Nebraska is a lovely state, but for a group of 16 and 17 year olds it lacked a certain appeal.  I mean I don’t know what more was exciting, the tour through the tractor factory or the fact that it rained almost constantly.  I didn’t care.  I had an entire week to spend with Brent.  Throughout the week our relationship evolved.  We became more comfortable with each other.  I felt as if that week would last forever, unfortunately it didn’t.  The week came to a close and we were once again forced to part ways.


Back in our respective hometowns our typical lives continued, along with our letter writing.  In the fall I would begin my junior year of high school and he would begin his senior year.  Like most high school students we both had a lot going on.  I started my first job and kept score for the wrestling team.  Brent began a new job and wrestled.  We were finding it difficult to write to each other as much as we would have liked to.


It began to become apparent that Brent wasn’t writing to me as frequently as he did at one time.   I tried to remain optimistic, but I was also becoming worried.  After reviewing several different scenarios in my head, I wrote him a letter expressing my concerns regarding our lack of communication.  He responded quickly telling me that his feelings hadn’t changed.  He wanted our relationship to remain the same.  He was simply busy with his senior year and things would get better soon.


With a renewed sense of faith in our relationship I made it my goal to put together the best Valentine’s Day box ever and send it to him.  I collected several meaningful items to put in the box.  I happily sent the box off and eagerly awaited a reply from him.


February 14, came and passed, and I didn’t hear from Brent.  I told myself that he didn’t mean to be late, he was just busy.  I re-read the most recent letter from him, especially the part where he told me that he didn’t want things to change between us.  I shared my fears with my friends.  They reassured me that we were meant to be between us.  There just had to be a reasonable excuse for the lack of communication.


When I least expected it, an envelope arrived.  It was in the shape of a card.  I felt a sense of relief sweep over me when I came across it.  I began to feel more at ease when I opened it and a Valentine's Day card was reviled.  Quickly I opened the card.  Under the message printed in the card, Brent wrote that he would always love me and signed his name.  My heart began to melt and I felt so silly for doubting our relationship.  I then began to read the handwritten message on the left side of the card.  My delight quickly changed to disappointment.


Basically he explained that he felt he was too busy to be in a relationship, but he would always love me.  The fool broke up with me in a Valentine’s Day card!  I was heartbroken.  I re-read his words over and over just to be sure that I understood them correctly.  Each time I read those words it was as if I had been stabbed in the heart and the sting grew stronger and stronger.


I felt so dumb.  How could I have believed his letter claiming that he was too busy being a senior?  I put too much into the relationship and was slapped in the face.  I placed so much thought into the gift I sent him, and now I just felt so foolish.


I was hurt and broken.


After receiving that card I didn’t see or hear from Brent for about a year and a half.  The summer before my freshman year of college my parents forced me to go on one last family vacation.  We traveled to Colorado with the car club.  Unfortunately Sara wasn’t able to bail me out this summer, which was even more of a disappointment.


Once we finally arrived at the hotel where everyone was staying I sulked in the hotel room.  Just as I was leaving the hotel room to find my parents, I was met with my mom and  . . . you guessed it, Brent.
I can still see the giddy look on my mom’s face and hear the happy tone in her voice as she said “Look who I ran into.”  I vividly remember giving him a nasty look and simply saying “Oh, Hi”.  I was hoping that those simple words along with the tone of my voice would adequately convey that I that I wanted absolutely NOTHING to do with him.
And just because my mom brought him to come and say hi to me meant nothing!  Absolutely NOTHING!   Let’s face it I was really a big ol’ bitch to him, but he deserved it, right?!


One day I went back to my dorm after class.  As usual, I checked my email.  I came across an email address that I didn’t recognize.  I was slightly cautious as I opened it.  The email was from Brent.    He had gone out of his way to search for my email address because I never gave it to him.  This meant he had to remember the name of the school ( I attended a small university) I told him I would be attending so that he could search the university data base.  Most 20 year old guys don’t put that much effort into connecting with a girl.


I was over whelmed with a flood of emotions.
When we were together things were wonderful.  Brent always treated me with dignity and respect.  No other guy ever made me feel special like he did.  He made me feel like a princess.  I could trust him.
But the fact remained, the fool broke up with me in a goddamn Valentine’s Day card, and it tore me apart!  Was I ready to let my guard down?  Could I overlook the past and have a future with him? Or would I always think of the pain and not let go?

Email ThisBlogThis!Share to TwitterShare to FacebookShare to Pinterest
Labels: how we met, part 4