What does The Tooth Fairy Bring? 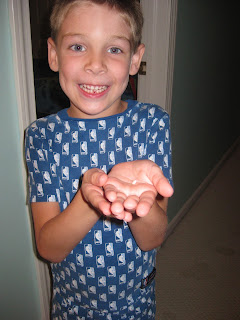 Last summer B lost his first tooth.  Losing a tooth is a pretty big deal.  Brent and I were faced with a dilemma –How much should The Tooth Fairy bring?

I thought since it was his first tooth, The Tooth Fairy should bring him $5.00.  Mr. Cheap Skate Brent thought $1.00 was enough.  My argument on the situation was that B, like any 5 year old, would want to spend his money immediately.  There aren't too many options for a 5 year old that cost $1.00.  I also thought that the first tooth should be worth more.

Brent held strong to his opinion that $1.00 was plenty, stating that, B would expect $5.00 or more for each tooth.

We struggled to come to a consensus on the payout.  So I made a post on Facebook to get the opinions of our friends and family regarding the situation.  I explained our debate and that I thought the Tooth Fairy should bring $5.00 for two reasons.  1)  It was the first tooth and 2) He wouldn’t be able to buy anything for $1.00.  Just to be fair I explained Brent's point of view as well {See, I can be nice}.

Wouldn’t you know . . . most people sided with me!  Surprise, Surprise {Sorry, I had to get 1 more dig at my hubby, Love you babe}!

And so the Tooth Fairy brought B $5.00 and he was THRILLED! 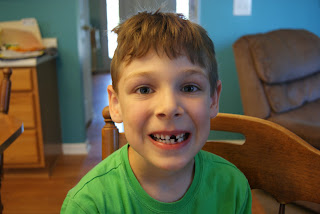 B lost another tooth tonight.  He looks like a true 1st grader now, with his missing teeth!

B has lost a total of 3 teeth and managed to chip 1 of them {He only had 2 adult teeth when the accident occurred.}.  Let’s hope he is able to keep the rest of his teeth safe!

Has the Tooth Fairy come to your house?  How much did she bring?
Posted by Erin at 8:27 AM