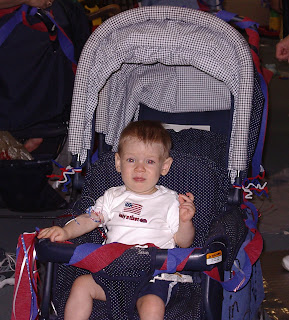 2006 = B's first 4th.  He was 9 months old.  The daycare he attended at the time took the kids on a parade each year.  They used to decorate the strollers and wagons for the kids to ride in.  The older kids made posters and things to carry.  Everyone had so much fun! 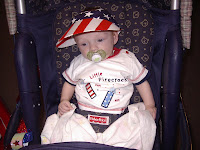 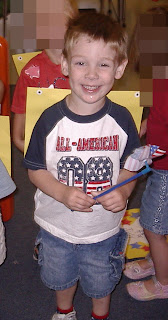 2008 {for some reason I couldn't find any 2007 pictures} = G's first 4th.  Both B and G were in the parade at the daycare this year.  B was 2 and G 3 months old.  The shirt G is wearing fits him perfectly, he is a Little Firecracker!  Little did we know then that his personality would be so explosive! 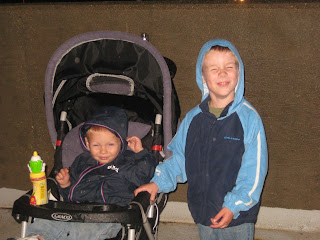 2009 = LG was 15 months and B was 3.  It rained this year!  Usually we go downtown to watch the fireworks.  The parking garage for Brent's office provides the perfect viewing area.  This year they ended up cancelling the fireworks due to the weather. 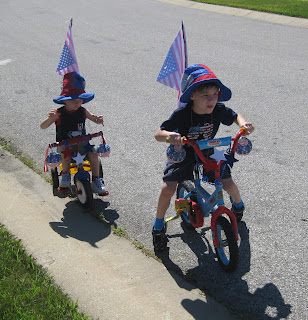 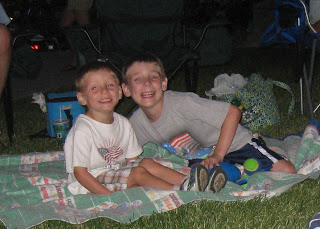 Finally we end with 2010.  B was 5, G was 3, and I was 16 weeks pregnant with Baby M.  G and B were waiting for the downtown fireworks to begin here.  This is one of my favorite pictures of the two of them.

Tonight we plan to continue our tradition and we are super excited for Baby M to be a part of it for the first time.  We will pack up the cooler, some chairs, a blanket, and a few toys.  We are heading downtown to join the crowd and celebrate our nation's birth.


What plans do you all have?  Are there any traditions that you will be celebrating?
Posted by Erin at 7:45 AM