You may recall this post, I Just Don't Understand, from April.

When I wrote it I expressed my fears, about Baby M's eyes, that had recently been confirmed.

We took her to see a pediatric opthamologist, in May, as suggested by our pediatrician.  At the time of the initial opthamologist visit Baby M was 4 months old.

During this visit the opthamologist noted that her right eye did, in fact have a horizontal drift, she was diagnosed with Strabismus.  I learned that Strabismus is an eye condition where the eye muscles don't line up and are too long, preventing the ability to focus the eyes.  Her vision was not affected by the Strabismus and was in the normal range for a child her age.

The opthamologist said he wanted to 'keep an eye' on it until she was 6 months old.  At that point further decisions would be made.  These decisions included the possibility of glasses or worse case scenario, surgery.  Before leaving I scheduled a second appointment for August.  This was the soonest I could get her in.

In June, we took Baby M to her 6 month, Well Baby visit.  The pediatrician inquired about our visit with the opthamologist.  I reported the information I was given, regarding the diagnosis and the waiting.  I also shared that I thought her eye seemed to be drifting more.  He agreed.

After hearing that the pediatrician agreed about her eye drift becoming more sever I called the opthamologist in hopes of moving her appointment up from August.  I was successful and the appointment was moved to mid June!

In mid June we took her to the second optamologist appointment.  I was dreading, but expecting, to hear that she would need glasses.

We met with a new doctor this time.  He was nice, but seemed to lack the 'kid friendly' doctor appeal that doctor #1 had.  It was very apparent that the first opthamologist was a father himself.  He related to Baby M very well and to Brent and I as well.

Doctor #2 walked in and seemed to have a little too much confidence in himself.  Don't get me wrong confidence is good, but there was just something about the way in which he entered the room that we found to be less than comforting.

Later, Brent and I talked and we both compared him to Christian Troy, from Nip Tuck.  {For those of you not familiar with the show, Christian was the self proclaimed 'ladies man' of the show.  The patients swooned over him and he practically had everyone eating from the palm of his hand.  To put it simply, he was a man whore.}  Now, I have no idea, nor do I care, about Dr. #2's love life.  I'm just trying to describe his demeanor.

He looked at Baby M's eyes and quickly did all of the measurements that had previously been done.  Then without hesitating and without any preparation he blatantly said, "Well let's not put it off.  She needs surgery."  JUST.  LIKE.  THAT.

I mean there was nothing that could have prepared me for that statement.  I wouldn't have wanted him to sugar coat it, but it sure would have been nice to have a little conversation that lead up to it.  Like maybe an idea as to what he was thinking regarding the measurements he had just taken or something . . . anything . . .

I'm guessing that our facial expressions or body language or something must have provided him with the clue that we were slightly 'shell shocked' with his statement, because he then climbed down from his pedestal and joined us mere mortals.

To be honest I don't recall much of the conversation that occurred from that point on.  I was still trying to digest the fact that my daughter, my then 6 month old daughter, was going to need surgery.  I myself, have only had my wisdom teeth taken out and I was 24 years old when that happened.  In my mind I kept thinking we're talking about an infant here.

As the conversation continued I managed to somehow speak coherently and mention that my school was moving to a 'balanced calendar' schedule for the upcoming school year.  We would have 2 weeks off for Fall Break in October.  I thought that perhaps this would be a good time to have the surgery.  Everyone agreed and the surgery was scheduled for October 12.

So we'll fast forward a bit from June to October.

This whole surgery thing was quite a learning experience for me.  While we had the date 'penciled' in we were not made aware of the specific time of the surgery until the Wednesday before {which I found to be a bit unnerving}.

I received several phone calls about the surgery throughout the week.  It seemed like someone from each department of both the surgery center and the eye doctor's office called me and asked similar questions each time.

Oh and to make things just a bit more fun,  I had to return all of the calls and play phone tag with each person at least 2 times.  I can't receive phone calls at work during the day.  I can listen to my voice mail and return calls on my lunch and prep, but of course those times don't work with other people's schedules.

As we were getting ready for work Wednesday morning Brent and I talked about taking her to the pediatrician to find out what was going on.  I suspected it was an ear infection . . . and was correct in my suspicion.

Brent had taken her to the appointment and told them that she was scheduled to have surgery on Friday.  The nurse told Brent to call the eye doctor and alert them to the ear infection and the eye doctor would make the final call from there.

I called and left 2 messages about the ear infection as soon as I knew about it on Wednesday afternoon.  I didn't receive a response from them until Thursday evening.  The message I received stated that we should go ahead and bring her for surgery.  Things should be okay.  The anesthesiologist would have the final say regarding moving forward with surgery or not.

So feeling very nervous, about the surgery and on edge, about the unknown, regarding scheduling and what to prepare for before and after surgery, Brent and I arrived with Baby M at the surgery center on Friday morning.

Both the staff and the nurses were so kind to Brent, Baby M, and I.  We found them to be very comforting.

Baby M was in the best mood that morning.  She couldn't stop smiling and clapping.  She kept cooing and babbling to everyone within her sight.  She really is such a happy baby.  Whenever anyone talks to her, her whole face lights up and she just grins a big 'ol two bottom teeth grin.

We were taken to a small room where they listened to her breathing and we changed her into her hospital gown {Yes, they have gowns for babies}.  We met with the nurse, the anesthesiologist, and the doctor.  It was determined that she was well enough for surgery. 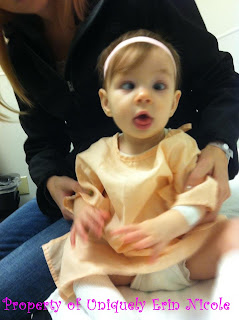 The doctor told us that he would be fixing 4 muscles {2 in each eye}.  He explained that the surgery would take about an hour.  When it was completed he would meet with us to let us know how things went. We would then wait for her to wake up from anesthesia and we would be taken back to her.  Our conversation concluded with him telling us, "We'll take good care of her."  {This was nice to hear coming from a doctor who seemed to show little, to no emotion}.

for what felt like the LONGEST hour of my life.  Thank goodness for Smartphones, texting, and Facebook.  Also, thank you for family and friends who prayed and sent messages of hope.  I'll never be able to repay them for that.

When we were called I felt as if I couldn't get to the counter fast enough.  We were taken from the waiting room into a small room to do none other than . . . wait some more.  I have no idea how long we sat in that room, but my stomach was in knots the entire time.  The longer we waited the more my mind raced.  I finally asked Brent why he thought it was taking so long.  He said he had no idea.  Again, I said "why do you think it's taking so long?  Do you think something went wrong?"  Now realizing how much I was truly freaking out inside he came up with some goofy reason to make me laugh {He's so good about that}.

Finally, the doctor came in.  He told us that everything went well.  He explained post-surgery care procedures and told us that when she woke up they would come and get us.

We were taken back to the waiting room to wait for her to wake up.  This wait didn't seem to last as long.  We were walked back to the recovery area.  A nurse was holding her and she was slightly moving and moaning.

Having Baby M placed in my arms felt almost like first time I held her when she was born.  I cannot put into words the sense of relief that was lifted from shoulders when I held my warm, breathing baby,who was making noises.  I immediately thanked God for keeping her safe.

Shortly after being led into that room we were able to change her back into her clothes and take her home.  We were told to expect her to sleep for most of the day and to give her Tylenol as needed.

She slept the entire way home.  When we got home she woke up for a little bit.  We gave her Tylenol and I nursed her.  She went back to sleep and didn't wake up until later that evening.

Throughout the whole process she has only had 3 doses of Tylenol and we have to give her eye drops 4 times a day.  I am in awe of her strength.

I got a paper cut on my cornea when I was in college and I can't explain how painful that was.  This little girl has had 4 muscles on her eyes moved . . . I'm sure the pain from my paper cut pales in comparison to what she has gone through.

To put it blatantly, She is Simply Amazing! 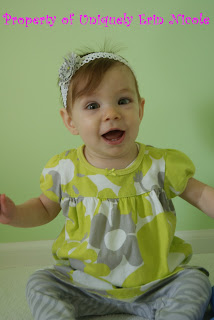